did you really think i wouldn’t post yet again about the “alexander mcqueen: savage beauty” exhibition at the met in its last week?  it’s coming to a close this sunday (8/07) and was a huge smash hit.  it was so successful that…

so if you’re planning to see it this week, you should probably sign up for membership to bypass the lines.

i’m sad i’ll never be able to see it, but at least i have the book (which i still need to read) and garance dore got photos!  this is a big deal since photography is prohibited in the exhibition.

the “alexander mcqueen: savage beauty” exhibit has been such a smash hit for the met that they’ve extended the end date from july 31st to august 7th.  and they’re also only opening the exhibit on mondays from 9:30 am to 2:30 pm, when the rest of the museum is closed (for those willing to fork out an extra $50).

on opening day, about 5,100 people visited the exhibit and the museum was forced to suspend guided tours due to the crowd volume.  this was the most trafficked opening day for any exhibit in the museum’s history since it opened in 2005.

even with the extension, i doubt i’ll ever be able to the exhibit since i was just in nyc and just missed the opening.  thankfully, my friends bought the book for me for my birthday (thanks again!  this book’s actually sold out on amazon right now!).  i can’t wait to read it…you know, once i’m done studying and taking the gmat…

i haven’t taken it out of the shrink wrap yet but it’s pretty cool because it has a holographic cover.

also, alexander mcqueen has begun pre-saling for their first cut (40% off) of spring 2011 collection.  i already asked about the scarf i so desperately want, but since it’s limited edition, it won’t be included.  they said it’s only selling while the exhibit’s up and then any excess inventory after would be shipped to the met. =(  i’m considering getting it anyways but it’s so expensive…

some of the pieces were more delicate and couldn’t travel to the met exhibit due to custom regulations, including the white dress worn by shalom harlow that was spray-painted by robots live on the catwalk.

the dresses will be on display starting today until the end of the month.

i feel like this is turning into an alexander mcqueen fan blog.

i previously posted about how bummed i was that i would be missing the alexander mcqueen retrospective “savage beauty” at the metropolitan museum of art in nyc.  i’m still bummed but i guess the next best thing is new york magazine’s private tour video.

can you imagine how amazing the collection is for it be nearly impossible for the curator to narrow it down to 100 looks?

i’m pretty bummed that i’ll be missing the alexander mcqueen retrospective “alexander mcqueen: savage beauty” at the metropolitan museum of art in nyc by days.  i’m leaving on april 30th and the opening launch at the costume institute benefit gala (met ball) is on may 2nd; it will be open to the public from may 4th to july 31st.  so if you live there, or are visiting during that time, please visit so i can live vicariously through you.

mcqueen has become one of my favorite designers…unfortunately i wasn’t exposed to his genius until after his sad passing.  long live mcqueen, rip.

The exhibition will examine more than two decades of McQueen’s work as a designer and couturier, from his MA graduate collection from Central St Martins College of Art, through his years as the creative director of the house of Givenchy, and the radical designs for his own label, up to his final collection, which was shown posthumously in Paris, just under a month after his death by suicide, at his home in London.

Alexander McQueen (1969-2010) was one of the most influential, radical and provocative designers of his generation. He saw beyond clothing’s physical constraints to its ideaological and conceptual possibilities, addressing questions related to race, class, gender, sexuality, history, and the future of Planet Earth.

His catwalk presentations were as lavish as they were technologically challenging, offering the audience a fleeting glimpse of fashion as performance art or the theatre of the macabre.

coinciding with the opening of the exhibition, the fashion house will be releasing this limited edition silk skull scarf:

it will be available in stores may for $495.  this will be a real collector’s piece so i’d love to have it.  i can only afford his pieces when they’re on second-cut sale–and even then, barely.  i’m fairly certain this will sell out so the chances of me owning it are pretty unlikely. 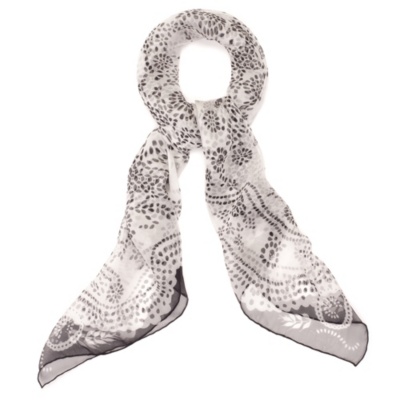 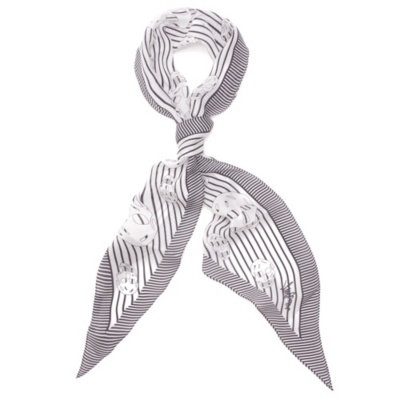